Skip to main content
March 16, 2013
Saturday, March 16, 2013  Soon to Move North again.
It has been a busy March and we leave Texas on March 20th so we are trying to get organized for the trip between events.
Don's slowpitch team won their championship against the 1st place team (who hadn't lost a game all season) on a very windy Tuesday morning. He then took the game ball and presented it to this team manager's widow at the "Fun-eral" the RV park they resided in was having that afternoon. On the Thursday of that week, Don played in the CAN-AM slow-pitch game and Canada won! So ends his ball season.

The Chili and Jello Dinner went very well with 10 couples participating. Brenda was the maker of the prize winning chili and was rewarded with a chili pepper sunvisor.
The Garden Club mulched the new garden near the entrance to Trophy Gardens. Hoping the plants make it through the hot dry summer - there are severe drought conditions in the RGV.

I had a trip out to South Padre Island with the Bike Club but it was a very windy day and we had our bikes but didn't ride them because of the wind. We did enjoy the Island's Birding Centre and a nice lunch at Daddy's on the Island.
I also went with TG friends to a Ropa and came home with 20 ties dug out of the gigantic clothing piles. 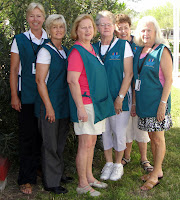 Enjoyed a few more lunches out with friends - Amelia and Ruth and I at the Corner Bakery Cafe in McAllen, Sue, Bev, Bonnie, Barb and I at Feldman's Liquor Store Deli, and the Morning Exercise Group at Renee's Boutique in Mission. Bonnie and I biked 14 miles (roundtrip) on Monday morning to have breakfast at the local Shriner's Club - biscuits with gravy tried - not my favourite.
Did my last night rocking babies at the Hospital NICU - they had 2 sets of twins - 2 boys and 2 girls - all born to parents as their first children. The little one I spent the most time with was born on Dec 5th so she had been there for awhile and was still less that 5 pounds.
Tomorrow is St Patrick Day and there will be a parade and party after it. I am decorating my bike to ride in it. Pictures later.