Showing posts from April, 2010
Show all

April 09, 2010
Friday, April 9/10 Lakefield, ON Canada After a lovely Easter visit with Tom and Diana in Virginia and an overnight hotel in Altoona and a wonderful bed and breakfast stop in St Catherines on Tuesday night we arrived back in Lakefield on Wednesday. We calculated we travelled over 10,000 miles (16,000 km) since we started this journey on Dec. 19/09. Our Ford truck gets 10 miles to a gallon of diesel fuel when it pulls the trailer so that is over 1000 gallons - at around$3 a gallon - you do the math. Our campground fees totalled about $2000. But the memories of the places we visited and the wonderful people we got to spend time with is priceless. Looking forward to our next journey! We are still rookie RVers but we have learned a few things on this trip which will make the next one easier. Thanks to everyone who had the patience to travel with us via this blog. Mary and Don signing off. Adios amigos!
Post a Comment
Read more 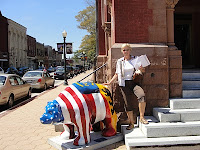 Thursday, April 1/10 New Bern, NC We enjoyed the beautiful sunny day today to look around the historic downtown are of New Bern, North Carolina. We are parked for these 2 nights in a small RV Park outside of New Bern. New Bern is a town of 28,000 on the East Coast at the mouth of the Trent and Neuse Rivers. It is celebratin g it's 300th anniversary of its settlement by Swiss explorers. New Bern is na med after Bern, Switzerland. "Bern is Swiss for bear so there are decorated fiberglass bears around the town for the anniversary. Also there are "historical hydrants" painted like historical characters important to the town. They also have a Firefighter's Museum here but we didn't tour it. We walked around the historic downtown area viewing the historical homes. It's most fa mous attraction is the Tryon Palace. This North Carolina government house, built between 1767 and 1770 by Royal Governor Wm. Tryon represented the British crown and became NC's fir
Post a Comment
Read more
More posts