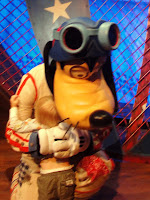 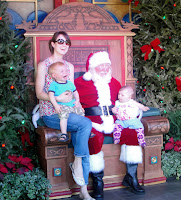 Got up early to make it to the front gates of Magic Kingdom before opening to see the Disney Characters arrive  on the Train. Katie got her Birthday Button at the Town Hall and all day the staff wished her "Happy Birthday" which she loved. On entering the Magic Kingdom, we hurried off to Fantasyland, which had just opened some new attractions and we visited the "Beauty and the Beast" area, then on to "It's a Small World", a 3 D show and more rides. We dined outside the Sky Cafe for lunch, Jacob fell asleep on the peoplemover ride in Tomorrowland and Hannah enjoyed a nap at the same time while Diana, Tom and Katie snuck off to Space Mountain and Oma minded the sleeping children. A picture with Santa was tried but Jacob doesn't seem to like Santa yet. But he did like some other Disney characters.
We lasted all day until 7PM with our last stop at the Child Care Center to feed the kiddies and got a beautiful Disney balloon on the way out for Jacob. Opa Don opted out of the Disney adventure and spent the day back at the Resort.
In our stay in Orlando area we also visited Disney Downtown for some shopping and an evening stop at the Disney town of Celebration - which had hourly snow falls - from soap blowers on the lampposts.
Don and I left Orlando on Sunday morning and Tom, Diana, Katie, Jacob and Hannah moved accommodation to a fancy resort hotel beside Universal Studios where Tom will be attending a conference from Monday to Friday and then flying home to Virginia. They did Universal Studios for a few days and then Diana and Katie drove back with the kiddies to Chesapeake on Tuesday. Katie stayed in Chesapeake until that Sunday and then flew home to Buffalo and drove back into Canada.