Hello from the Laguadia Plaza Hotel   Wednesday, October 17, 2012
Southwest Flight
So they offered to send us to Chicago on an earlier flight today since our plane was delayed from Orlando and we would probably miss our connection in Baltimore. So we were on 2 full planes today - at the back - not together - but we got here at 5:30  - rather than a 7:45 flight out of Baltimore. We got a shuttle over to this hotel and now we are going to scout out some dinner. We would have sent a note from Chicago but we could not get an Internet connection.

Thursday, October 18/12
Arrived at our apartment right on time at 5 Pm and the lady was right
here and we got settled. We picked up some wine on the way to the
apartment and now having a much needed drink.
So this is what we did today:
Got up at 6 am and took the 7 am shuttle to the subway and got
squished to Manhattan and got off at Grand Central Terminal where we
had breakfast.
On to the Empire State bldg and did the audio tour with our Citypass.
On to NYC Library, Chrysler bldg, United Nations, St Patrick's
Cathedral, Radio City Music Hall, lunch, Rockefeller Square, Times
Square (saw the Nasdac window) and got half price tickets for a play
tonight - The Heiress.
Then we picked  our carry on bags at a storage place and strolled to
our apt on 21st street and my feet are very tired and sore.
Having some wine and we will be off for the theatre at 8 Pm. Going
through lots of money!
Friday, October 20/12 Wow - I can't believe we got on. We were very tired and hungry after a
day of museums. We started off this morning around 9 am. We had
breakfast at the apt cause we picked up some groceries last night
around the corner from here. The Museum of Natural History didn't open
till 10 so we had time to check out "the Dakota" - the residence of
John Lennon - where he was shot - it is across from Central Park's
Strawberry Fields. So back to the museum for 3 hours - it is an
amazing place and we took a 90 minute tour with George -  retired
English teacher. We only had juice and a granola bar for lunch cause
all the museum food places were crammed. It was a rainy day so museums
were the place to go.
Then we crossed over Central Park to Art Museum and saw the highlights
there for and hour or so - a Brunini exhibit, a Andy Warhol Exhibit  -
not a fan, and the Egyptian area. Both museums are monster big and
busy. They were part of our Citypass package which seems to be working
out very well and we don't have to stand in lines.
From there we went back to Times Square and purchased our same day
half price show tickets, beat it down to the Nasdaq corner and left
there around 5:25 to go to dinner off Broadway in a little French
Restaurant  - really good. then to see an off Broadway play called
"The Fantastiks" which was okay but not sensational. Then Subway home.
We bought a 7 day subway pass for $29 on our way in to Manhattan and
that seems to be paying off cause we were on it 3 times today and 2
times yesterday.
Tomorrow to Wall Street and Ground Zero etc.
That is the report for today. NYC is crowded and it doesn't seem like
the city sleeps  - the streets are crowded and the traffic is crazy.
Saturday,  October 19/12 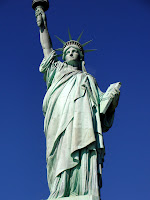 So this is what we did today in Manhattan:
We started out a little after 9 am for the HighLine walkway - a raised
walkway that used to be a raised railway line to downtown Manhattan
and the meat packing area there.
We got off at the Chelsea Market  - are make of the old Nabisco
factory into shops.
From there we walked over to Washington Square - saw the Arch and the
Mews and the expensive town homes there.
Back on our way with the subway to 9/11 Memorial. We saw ground Zero
and when through St Paul's Chapel across the way that was not damaged
when the towers collapsed.
On to Wall Street and the Bull Statue which was surrounded by many
police officers who were waiting for a protest group moving down Wall
Street.
We went over to the Staten Island Ferry and took a free round trip for
the next hour - it was a beautiful sunny day to cruise the harbor and
pass by the Statue of Liberty.
From there we strolled uptown - by the Courthouses, Chinatown, Little
Italy, New York University.
We stopped for a lovely dinner at "the Outback" and made it back to
the apartment by 5:30  - tired again. No Broadway show tickets tonight
- thought we would leave the tickets for the crowds at Times Square.

Just to let you know we have kept
ourselves busy on Sunday and Monday.
So on Sunday:
We started out on the subway around 9 am and headed down to Battery
Park to catch a ferry over to The Statue of Liberty - long lines but
we hung in there and made it over. It was a bright sunny day so very
pleasant to be outside. We took the 30 minute audio tour and learned a
few things - the thickness of the copper is than of thickness of 2
pennies which is covering a scaffold similar to the structure of the
Eiffel Tower - because it is a precursor of the Eiffel Tower from the
same designer. It took 20 years for the copper to turn its green
color. The tour just goes around the base of the Statue - no climbing
up at this time but that is coming soon.
From there it was back on the ferry over to Ellis Island and learn
about immigration through the port of New York from the late 1800s to
the 1950s. Sometimes it was 12000 people in a day in the 1920s. That
was a 45 minute audio tour going through the registration process the
new immigrants went through at that time.
Back on the ferry to Manhattan, had a late lunch at Whole Foods on
Houston Avenue - interesting check out lineups. On to Orchard Street
for bargain shopping and Susan bought a lovely lamb skin leather
backpack purse for $30. Then back on the subway to Times Square and
picked up some half price Chicago the Musical tickets (still $75 each)
for tonight's 7 pm show. Subway back to the apartment for a snack and
wine before the show. The show was really good - in the old Ambassador
Theatre.
Monday: Packed up and said bye to the apt and subwayed up to the luggage
storage place on 46 th st. Walked over the Top of the Rock tour at
Rockefeller Square. It had indoor and outdoor decks 70 stories up the
GE tower. Great views on another beautiful sunny day.
Onward to the museum of Modern Art - saw a Picaso and a few Monet
paintings but the rest didn't impress Susan or I so we didn't stay
there too long. That was our last coupon on our CityPass so we think
we got or $89 worth since most of the 6 stops were $25 entrance fee.
Then we strolled along the big stores on Fifth Avenue like Bergman and
Saks. We took 59 th street over to Bloomingdale's and had a lovely
lunch on the 7 th floor at their "forty carrots" restaurant. For there
we subwayed north to check our some upscale charity thrift shops on
the Upper East Side. Susan got sidetracked at Radio Shack and bought
herself an iPad2 for $400.
The thrift shops were way overpriced - no shed bargain prices.
We subwayed back to a bicycle shop on 46 th street and picked up bikes
to do Central Park for a few hours -which we did from 3:30 to 5:30
busy place but we made it around the whole park. We booked the bikes
on line yesterday so the rate for the 2 hours was $14  - half price
from regular.
Then we enjoyed a Brazilian dinner in a restaurant close to our luggage place.
We retrieved our luggage and subwayed and bussed into Queens to return
to the hotel we stayed in the first night in NYC  - close to LaGuardia
Airport for our flight tomorrow at 11:10 AM.