Skip to main content
April 15, 2012
March and April 2012 Summary
We have been back home in Lakefield as of Tuesday, April 10/12, so there is a gap in this blog for March and the beginning of April that I will attempt to summarize.
From February 28 to March 12, I was in Chesapeake, Virginia. I had the pleasure of looking after our first grandchild, Jacob (9 months old) for a week while our son Tom and his wife Diana spent a well deserved vacation in Mexico. Here is a picture with Tom and Diana with Jacob and this is what 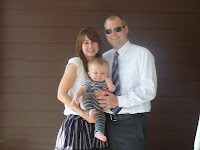 Diana wrote on her Facebook page on March 26/12. "
Forever in our arms, Jacob William David! With full hearts we are proud to announce the adoption of our son, born in Virginia, on May 30, 2011. Welcome Home Jake! We are also happy to share that our “forever family” continues to grow through the gift of adoption. We are anxiously awaiting the arrival of Jake’s baby sister, due June 3. Please continue to keep our family and our children’s very special birthmother in your thoughts and prayers – all our love, the Marsdens!
Jacob is a h 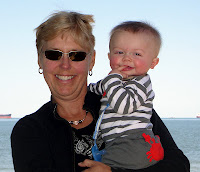 appy little guy - even with a cold (which I picked up from him too - although the pediatrician said it was only teething), his pleasant personality shined. We even got to go to the beach together.
Katie joined me in Virginia since she was on school break and we looked after Jacob together. We didn't spoil him too much? Tom and Diana returned from Mexico and on my last night in Virginia, Tom treated me to a St Patrick's Celebration Concert featuring "The Chieftains" at the Sandler Ctr in Virginia Beach.
Don stayed back in Texas and went through a bit of a cool spell there but enjoyed his slow pitch playoffs and the final banquets too. He wants to play next winter again. 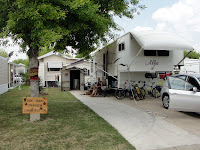 When I returned to Texas, we move the trailer 3 parking spots to a lot with more concrete and acquired a 6 x 8 foot shed with a washer and dryer from Don and Maureen since they sold their 5th wheel trailer and bought a park model trailer - very nice.
I attended Winter Texan Appreciation Day in Progresso Mexico on March 21 with Barb, Sue and Howard, Bev and Mike - bought cinnamon and vanilla. Barb and Lance, Sue and Howard and I bike on the Colonel Rowe Bike Trail in McAllen. We enjoyed our last days with our Texan friends - biking, golfing, swimming and then packed up for a long drive home - with multiple stops along the way. We left on Tuesday, March 27th and stayed that night at Springhill Suites by Marriott in Lake Charles, LA. ( Tom graciously used his Marriott points for our hotel stays on the way home - we were spoiled). On the Wednesday, we arrived in New Orleans and stayed that night in the JW Marriott on Canal Street. I toured the French Quarter in the afternoon and Don and I had dinner on the 27th Floor Executive Lounge in the Marriott. After dinner we attended a Jazz Concert in "Preservation Hall" - around the corner from the famous "Bourbon Street". New Orleans was getting very busy because "The Final Four" basketball teams were competing there that weekend and many fans and teams had alread

y arrived. (No one asked me "How tall are You?" there.) Friday morning, I took the St Charles streetcar to the Garden District and did a walking tour there which included a cemetary tour too. We left at noon and travelled to Tallahassee Florida and stayed the night at TownePlace Suites by Marriott. On Saturday, after encountering many rain showers, we arrived in Pinellas Park and stayed 2 nights with Thery and Brian King. We enjoyed April Fools, walks, Seaside Grill and line dancing there. On Monday, April 2 we drove across Florida to South Palm Beach to spend 2 nights with Richard and Barb Croft in a beautiful waterfront condo they rented for the winter. This is a very rich area - passed by Donald Trump's home there a few times. We had delicious meals - first night a barbecue at Steve's beautiful home on the water and the second night at a very fancy Grill Restaurant. On April 4th we drove up the coast and stayed the night outside St Augustine, Florida at the Renaissance Hotel in a Golf Resort. I took the shuttle into St Augustine and did walking tours of this historical old town.
Our last night in a hotel was spent at the Fairfield Inn by Marriott in Fayetteville, NC. We arrived at Tom and Diana's on Good Friday and enjoyed Easter weekend with them. On that Saturday, there was a baby shower for Diana - for Jacob and Hannah - put on by Katherine and Bridgette - good friends in their neighbourhood. Monday morning we left for the long drive to Canada and arrived in Waterloo to spend the night with my sister Dorothy and brother-in-law Ed. On Tuesday we travelled through Toronto and had a lovely lunch with Don's parents and made it home to Lakefield by 3 PM in our packed full little Subaru Impreza.
March and April 2012