November 12, 2011
Mary Travels to Washington DC Nov 6/11
Since son Tom works in Washington DC a week a month I thought I would take this opportunity to visit with Tom and share his hotel room to have a home base to explore Washington DC - hadn't been there before. Don decided not to go with me because he had been to Washington on a tour when Tom was in Air Cadets.
On Sunday, Nov 6/11 I drove down to Buffalo Airport and flew Southwest to Baltimore Airport ( little over an hour flight) for cost of $159.40 return. I took the Amtrak train to Alexandria VA ( another hour and cost of $51 - one way). Tom picked me up at the King Street stati

on and we had a lovely dinner at a "The Wharf" Fish Restaurant in this beautiful historical port town - close to Mount Vernon - home of George Washington. I had delicious She Crab Soup a

nd Tom had Crab Cakes - shared dessert of pumpkin creme brulee - yummy. Home to the Marriott Courtyard Hotel - handicapped suite - in Springfield, Virginia. Tom gave me the king sized bed and took the sofa bed himself in the other room. Wasn't that nice!
Monday, November 7/11 Sunny 65 degrees
Breakfast of fancy oatmeal at the hotel cafe bar and then Tom dropped me off at the Metro Station - bound for Downtown Washington DC. Invested $31.50 on-line for the Old Town Trolley tour for the day to get oriented to where the points of interest are situated. First did the Uptown - Georgetown Loop - past the National Cathedral (Anglican) - but could not stop to to 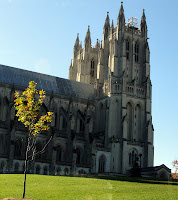 ur this stop because it was closed - due to damage from the August 2011 earthquake. We toured by lots of embassies (Embassy Row) on Massachusetts Ave., National Zoo, Georgetown - old historical part of DC, Washington Harbour, Foggy Bottom where George Washington University owns blocks and blocks of real estate, Watergate Comple

x, and around the back view of the White House. That tour lasted about 90 minutes and then I needed some exercise and strolled over to the Old Postal Pavillion to view the city from the height of the observation deck in the tower - 270 feet high. This was a good alternative to going up the Washington Monument because that was closed due to earthquake damage too. It also housed bells in its tower.
From there I strolled back to the trolley headquarters and had a few minutes before the National Mall/Downtown Trolley Route so I toured the Ford Theatre and saw where Abraham Lincoln was shot by the actor John Wilkes Booth - a Southerner. Lincoln died later in a house across the street from that theatre. All this before noon - what a tourist!
Afternoon tour by all the buildings on The Mall - Smithsonian Museums and Capital Building, Supreme Court, Library of Congress and Union Station. Stopped off at the Smithsonian Castle - saw film and back on to go by Thomas Jefferson Memorial, Roosevelt Memorial, an 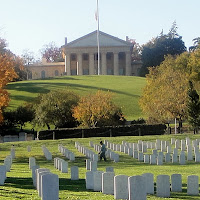 heck out the Arlington Cemetery. Walked around there for a few hours - visited JFK's gravesite, Arlington House (Custis - Lee Mansion) Amphitheatre, Canada Cross and the Tomb of the Unknown Soldier. Trolley back over the bridge to see the Lincoln Memorial, Vietnam Memorial, WWII Memorial (at the end of the Reflecting Pool - under construction) and the Korean Memorial. Crossed back over the bridge with the Trolley and caught the Metro at the Arlington stop and back to Springfield by 6:30 PM. Tom and I went out to dinner at a lovely Steakhouse - I had a stuffed Acorn Squash and Tom had fish. Then a trip out to Tyson Square Mall to refund an item for Diana. The Santa chair display was already there for the Christmas shoppers. Back to the hotel - and the hot tub to soak my weary bones. Great day!
Washington DC Nov 6-7/11