Still in Arizona and what is happening now you ask? Well ..... 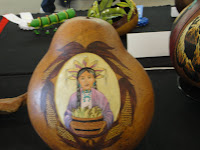 1) Sally and Barb very much enjoyed their 4 days at the Casa Grande Gourdfest. They learned new techniques, bought a few items and conversed with gourders from all over.
2) Sally, Russell, Barb and I did take in a movie one night - "The King's Speech" starring Colin Firth - good movie that should get some Oscar awards?
3) On Monday, with Gourdfest over, we had a day to do touristry things before our time together was over so we first visited the Casa Grande Ruins. Casa Grande means Great Hous 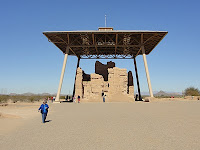 e in Spanish. It is a structure built in the middle of the desert by the Hohokam Indians 700 years ago. It consists of 11 rooms and is 4 stories high (picture to follow when I return to Texas). It was situated in a community of thousands of Indians and they are not sure of the function the building had but it may have been an observatory because there are openings in the building that align specifically with the sun and moon at specific times - like solstices. To researchers' best knowledge, the Great House was abandoned around 1450 by the Sonoran Desert people who then inhabited the area and who have been credited with the extensive canal system left behind. Why did they leave -disappear? No one knows for sure but the theory is that it was because of years of drought, the Indians could no longer farm. For many years, the ruins were subject to vandalism, extreme weather and general wear. In 1892, it became the first prehistoric and cultural preserve in the US. In 1903, a roof was built over the structure to give it protection from the elements. Since 1918 it has been under the National Park Service.
We moved on to have lunch in historic Florence - mexican fare at the L&B restaurant -on their outdoor patio. This spot was recommended by the park ranger at the Casa Grande Ruins.
We then did a short walking tour of Florence - highlighting all the different architectural styles of buidings there. These range from the earliest Spanish Colonial/Mexican Sonoran adobe vernacular, through at least 2 distinct phases of hybrid, or Anglo-Sonoran Territorial and finally through a rapid succession of purely Anglo-American brick and frame styles imported from Eastern, Midwestern and Californian cities during the closing years of the Territory and early years of statehood.
We made it back home for a wonderful pizza supper - dough made by Russell.
4) Changeover day on Tuesday. Russell, Sally and Barbara were all packed up and on the road to Phoenix by 10:30 AM. Barb was dropped off at the Phoenix Airport to catch her flight back to Buffalo to dig out her car and drive back to Lakefield. Sally and Russell motored on north, passing through Sedona and on to the Grand Canyon area for the night and then ma 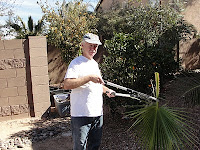 ke their way over the highways back to the cold of the north.
Tom and Lynn arrived at Phoenix Airport at 3 PM and glad to be back to the warmth of Arizona and with all their pets - and I am happy to report that my little charges survived!
5) So I have a few more days to spend with Tom and Lynn before flying back to Don in Texas on Monday - Valentines Day - how sweet is that? Hope Don is busy cleaning up the trailer for my homecoming?
February 9/11 Wednesday