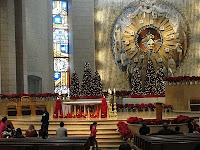 in San Juan - about 5 miles from our RV Park. This shrine averages more than a million visitors a year and is one of the most visited shrines in the United States. We arrived today while a Spanish mass was going on with capacity attendance - 3500 in the basilica - floor and balcony seated and about 2000 standing and more people outside. It was the 4th mass of the day with 2 more scheduled.
The history of this Marian shrine 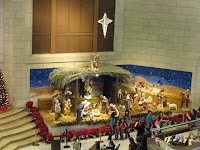 began in 1920 as a small wooden chapel. A bigger church was built in 1954 but was destroyed in 1970 by a tragic event. While 50 priests were concelebrating mass with another 50 people in attendance, and 100 school children in an adjacent cafeteria, the pilot of a small low-flying airplane crashed into the roof of the shrine and exploded into flames - the pilot was the only fatality. A new shrine was built and dedicated in 1980. The beautifully landscaped grounds feature the 14 Stations of the Cross. In 1999, Pope John Paul II dedicated it as a minor basilica.

So we have passed our days playing lots of golf and some biking and time at the pool. From before Christmas there have been nightly fireworks in the neighbourhood and on New Years Eve they went on from dark (6 PM) to 1:30 AM and some after that.
Don has joined the First Responder Team in Trophy Gardens. This is a team of 8 volunteer residents who carry a pager and help residents that have emergencies in the park here and assist the ambulance if needed. I am off on a long bike ride tomorrow morning with the bike club - 17 mile roundtrip but we get to stop for breakfast. On Wednesday, I am off for a Mystery Bus Trip - will report after.
Basilica Visit