Skip to main content
January 15, 2011
It has been a disappointing rainy cool week in Texas but we manage to do what we can - no swimming or golf for a few days - but no snow either so we can't complain.


We did go on a outing on Thursday night to Quinta Mazatlan in McAllen (across from the McAllen International Airport). It is one of the largest remaining adobe homes built in Texas and dates back to 1935. There is a cottage and hooch (3, 325 sq ft)and a main house(

6,739 sq ft)( all constructed of 12 inch adobe block). An unusual feature of the house was the aluminum sulfate paint on the inside and out to prevent radar waves from penetrating the building.


There was 25 x 55 ft adobe block bathing pool. When constructed, the pool was all one depth, that being 12 feet. It was known as a draw and fill pool, as it had no filtration system. It had to be drained and refilled whenever the water became dirty. It was filled from a freshwater well located at the back of the cottage. The owner would attach a six-inch pipe at an airplane engine and jet water fifteen feet through the air into the swimming pool, filling it in less that 30 minutes.


The estate (with its 8 acres)was lived in till 1964 and sat empty for 3 years until a local couple bought it for $24,000 and restored it. It was sold in 1998 to the City of McAllen for $1.4 million. It is now the McAllen wing of the World Birding Ctr, offering nature trails and water features. It is also rented for meetings, conferences, weddings and other celebrations.

We went to Quinta Mazatlan to listen to a presentation on "Exploring the Edges of Texas" - a book written by Walt and Isabel Davis, a retired botanist and a reference librarian/birder who spent the first 4 years of their retirement - covering 4000 miles. They researched 16 stories of botanists and naturalists who first explored Texas. Inspiring. Isabel did say that they were ready to spend some time at home now.

On Friday afternoon we blew the budget and spent the rainy afternoon at the movie theatre to see "The Social Network" - story of the biginning of Facebook. ($1.50 each). We liked it.

After picking up a few bargains from the lawn sales in the park on Saturday morning, I went with another park resident to a Mariachi Band Concert at the University of Tex 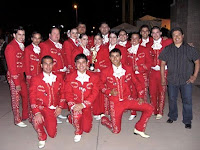 as - Pan American in Edinburg for the afternoon. The UTPA Mariachi was founded to promote Mexican folk music and the culture of the Hispanic people for the benefit of the students and community of South Texas. This Mariachi Aztlan group performed at the White House in Oct. 2010 and have travelled internationally and won numerous competitions. I didn't understand the Spanish songs but the music was amazing - so much talent - singing, violins, trumpets, guitars and a harp - plus a dance group and junior high band joined in too.
Jan 15/11 Saturday